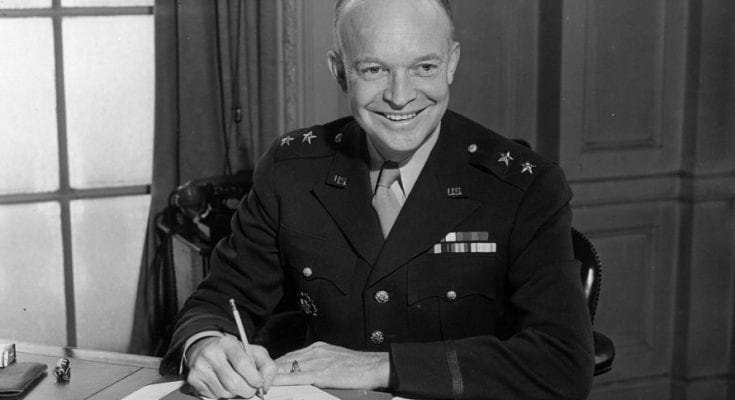 Sometimes referred to as “Ike Dollars”, the Eisenhower Dollar coin was the last “big” coin issued by the United States Mint.

But, given their large size (you can compare it with US coin sizes), the Eisenhower dollars never became popular and didn’t circulate well. This led to them being replaced by the smaller Susan B. Anthony dollar coin a few years later.

Because of their short minting period, the non-silver and silver Eisenhower dollars are becoming more and more popular with U.S. coin collectors. This means the value of these one-dollar coins is increasing too. This is good news for the few of us who have been collecting them over the years.

In fact, Eisenhower dollars are great collectable coins because they were only minted for a short duration and there are many different compositions, rarities, mint sets, and variety which all add to the fun, challenge, and profitability of hunting down “Ike” dollars.

Former President and World War II General Dwight D. Eisenhower is the president on the Eisenhower dollar coin – I hope that was obvious, given the name.

But why was he on the dollar coin? Time for a short history lesson!

Before the Eisenhower dollar, there are had been a thirty-year long break from creating dollar coins. The last dollar coins struck were the Peace Dollars in 1935.

In the early 1960’s the United States had a coin shortage, especially coins that were composed of silver. The value of silver had risen, and many speculators believed it would continue to rise which would effectively make silver coins worth much more than their face value.

Because of this great coin shortage and the high value of silver, the U.S. government said it would flood the nation with coins.

To make this easier, President Johnson, in 1965 proposed to pass legislation that would allow dimes and quarters to be struck with a clad composition (i.e. made of a copper-nickel composition) and would reduce to composition of silver in half dollars from 90% to 40%.

President Johnson enacted the bill, known as the Coinage Act of 1965, on July 23, 1965 with the amendments that the striking of silver dollars would be banned for five years.

But five years went by and the first legislation to create a new dollar coin was brought to life in the fall of 1969.

When President Dwight D. Eisenhower died on March 28, 1969, there was popular consent that the new dollar coin should bear his likeness.

The legislature also wanted a commemorative coin that would remind Americans of man’s first steps on the moon – the moon landing.

Thus, the backside of this coin is an image commemorating the 1969 Apollo 11 Moon mission and is based on the mission insignia. It shows a bald eagle landing on the moon, olive branch in hand as you can see below:

Both the portrait and the reverse design were designed by Frank Gasparro, the Chief Engraver for the U.S. Mint, who also designed the Lincoln Memorial on the reverse side of the penny.

The bill to create this coin was passed on Dec. 31st, 1970. In July of 1971, the uncirculated and proof versions of the new Eisenhower dollar coin were made available for collectors. The first coins issued for circulation weren’t struck until November of the same year.

Earlier, I mentioned that the Eisenhower dollar had a few different varieties. In 1976, the bicentennial of the American Revolution, a new reserve design of the Ike dollar was introduced.

This version is one of my favorite coin designs, it depicts the Liberty Bell with the moon behind it. The designer, Dennis R. Williams, wanted to pay tribute to the original design but included the Liberty Bell as a symbol of…you guessed it, liberty and freedom. You can see the design below.

This obverse design appeared on any dollar coins minted during 1975 and 1976. It may be a little confusing, but these coins carry a dual date of “1776-1976” to commemorate the bicentennial of the American Revolution.

Eisenhower dollar coins were minted from 1971 to 1978. If you find any coins with dates outside that range, you’re looking at a fake coin.

What are Eisenhower dollars made of?

There are two versions of the Eisenhower dollar, the circulated coin and the uncirculated collectible coin. Both are made of different compositions.

While the silver minted coins were specially made for collectors, some of them made their way into circulation. If you stumble upon an Ike dollar in the wild, it’s always a good idea to check if it’s a silver dollar before spending it.

How can I tell if an Eisenhower dollar contains silver?

There are two ways you can tell if your Eisenhower dollar contains silver. First, the silver dollar has an obvious “S” mint mark on the reverse (obverse) side of the coin.

That’s the side without the face on it. You can also check the edge of the coin. If the edge has a solid copper stripe, then it’s a copper-nickel composition.

If it has a solid silver stripe, then it’s a silver dollar. Having both an “S” mintmark and a silver striped-edge is a good indicator that you have a 40% silver coin on your hands.

Congratulations! Don’t use it to buy that cup of coffee you’re craving.

While the face value of an Eisenhower dollar is exactly what you would expect – one dollar, many of them are worth much more to coin collectors.

Below is a list of all the years the Eisenhower dollar was minted along with any key variants, rarities, and dates that hold a premium value over other silver dollars.

The value of any coin to a collector is dependent on a few factors, foremost of which is the condition of the coin. Below, I’ll be giving the average value of the coin in “average” condition and in MS+ condition.

Average condition refers to a condition similar to other coins issued at that date. MS+ is a certification given by a coin grading company such as the PCGS (Professional Coin Grading Service).

Coins that are graded as MS+ are considered “mint state coins” and are in the same condition as originally produced – i.e. they’ve never been in circulation.

I am also mentioning the numismatic value of the coins below. This refers to the value that a coin collector would on average pay to buy the coin on a coin marketplace or from a dealer.

If you plan on selling any of your coins to collectors, this is the price you want to pay attention too.

The face value of the non-silver 1971 Eisenhower dollar is $1.00. Depending on the condition, the numismatic value can range from $2 for a circulated coin in average condition to $85 for a MS+ graded coin.

The face value of a 1971 Silver Eisenhower Dollar is also $1.00. However, because of the silver content, the melt value of the coin is whatever the price of silver is at the time.

The numismatic value is around $7.00 for an average condition silver dollar and up to $65 for a uncirculated MS+ condition collectible.

The 1972 Eisenhower dollar is worth $1.00 at face value. However, a collector would expect to pay anywhere between $2 to $140 for this coin, depending on the condition of the coin.

The 1972 S Eisenhower Dollar (has an “S” mint mark) can be sold to collectors starting at $11 for a poor condition silver dollar and up to $140 for an MS+ grade condition.

The 1973 Eisenhower dollar coin has a face value of $1.00. The numismatic value of this coin ranges from $10 to $50 depending on its condition.

The 1973 S Eisenhower dollar (silver) also have a face value of $1.00. However, since it contains silver, the melt value of the coin is whatever the price of $0.3161 oz of silver is at the time.

The numismatic value of this coin also ranges from $10 to $50 depending on condition.

The 1974 Eisenhower dollar value is around $11 for an average condition coin and go upwards of $40 for a pristine (gem proof) condition. This price also includes the silver dollar variant.

You’re probably wondering why the two compositions of coins are worth around the same value. It’s because the silver dollars were produced for collectors, which means, on average there are more silver variants in amazing condition compared to the clad composition coins.

Circulated Eisenhower one dollar coins in mint condition are extremely rare and command a much higher price than uncirculated silver dollar coins.

The bicentennial 1976 Eisenhower dollar value is anywhere between $5 and $70 depending on condition. This includes the value of the silver dollar variant.

The 1977 Eisenhower dollar’s numismatic value ranges from $2 to $10. If it’s a silver variation, add a few more dollars on top of that to account for the silver content value.

The 1978 Eisenhower dollar’s numismatic value ranges from $2 to $10. If it’s a silver variation, add a few more dollars on top of that to account for the silver content value.

Collectors like to assemble a collection of all the dates or all the dates and mints. If you have a complete set, it commands a higher premium than if you sell each coin individually.

Where to buy Eisenhower Dollars

For example, here’s a set of 1973-1978 gem proof silver Eisenhower dollars on Amazon.

If you enjoyed this article and collecting Eisenhower dollars, you should also check out the other fun U.S. coins that can be collected such as the Morgan Dollar, the Kennedy Half Dollar, and the common Washington Quarter. While some of these are pretty common coins, there are misprints, mint years, and variants that are considered rare coins and can be fun and profitable to hunt down.