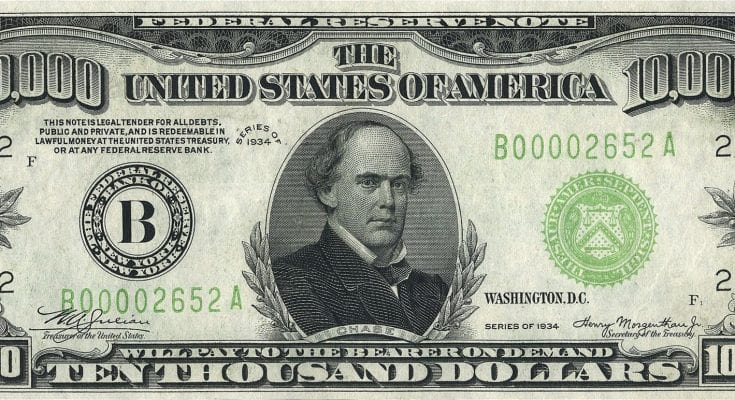 The US currency system has gone through many changes over the years especially paper money. These changes in the paper money were made due to many reasons.

One of those reasons is to overcome the sophistication of thieves. The other reasons include the lack of demands and the rising costs. Due to these changes, there were many denominations of the paper currency which also includes the 10,000 dollar bill. 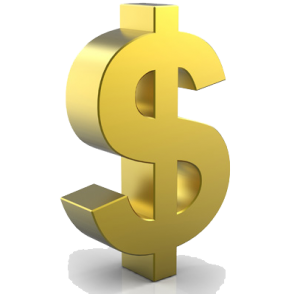 The US treasury stopped printing this builds many years ago but the $10,000 bill did not lose it’s worth even today. What is not merely a piece of paper but holds a lot of value and worth.

Nowadays, if someone hands you a bill with any number higher than $100 printed on it, you’ll instantly be skeptical. $100 bills have been the norm nowadays being the highest bill a person will typically get their hands on.

So naturally, if we were handed anything greater we would instantly think it was a fraud.

But if you have a real one, they are in fact recognized by any national bank and u.s. department of the treasury. But read the rest of this article before you rush off to the bank to deposit this bad boy. If you truly have your hands on a legit bill then you can make way more then its face value…

But not so long ago, high denomination bills were in public circulation.

In fact, as you’ll soon learn, it was much higher than that.

We used to have $10,000 bills, and they’re still considered legal US tender. It was the highest denomination U.S. currency to be in public circulation. Can you imagine walking into a Walmart and paying for a stick of gum with a $10,000 dollar note? One of these bills sure would be the envy anyone during this pandemic and market shift.

The chances of you stumbling upon a high denomination note like this are low. In fact, it’s been estimated that only 350 $10,000 dollar bills are still in circulation. And most of those are in the hands of museums or private collectors.

In fact, if you do have a $10,000 dollar note in your possession than the last thing you’d want to do is to use it to buy groceries. The value of the bill is much greater than $10,000 because of its rarity.

But before we talk about value, let’s learn a few things about the elusive $10,000 bill.

If we look into history, the US government has issued many different dollar 10,000 bills. But among those, the most commonly used notes were the ones that were issued in 1928. These were issued when the system of printing banknotes was overhauled by the federal government.

This dollar 10000 note featured Salmon P. Chase. It has been heard by few people Salmon spoke about the rarity of a $10,000 bill. In the mid 19th century, Salmon served the main important rules.

He served as the chief justice of the US as well as the senator and governor of Ohio.

Nowadays as we know that the wire transfers are used to move large sums of money, but at that time the $10,000 bills were used for such large transactions between the banks.

There were very fewer people who were having dollar 10000 notes, that is why these never gained much popularity with the people. That is the reason why these bills were considered as high denomination currency in 1969. And just because of their great rarity, it’s current value is far more than its face value.

The $10,000 dollar bill features the portrait of Salmon P. Chase.

Salmon P. Chase was the Secretary of the Treasury to President Abraham Lincoln.

That alone doesn’t make one worthy of adorning a $10,000 dollar bill though. Salmon Chase was in charge of the Treasury when the federal government introduced modern banknotes (greenbacks). In 1928 he was honored for the role he played, by having his face put on the shiny new $10,000 dollar bill.

There are actually two different series of $10,000 dollar bills, but both have Salmon P. Chase face on the front of it. 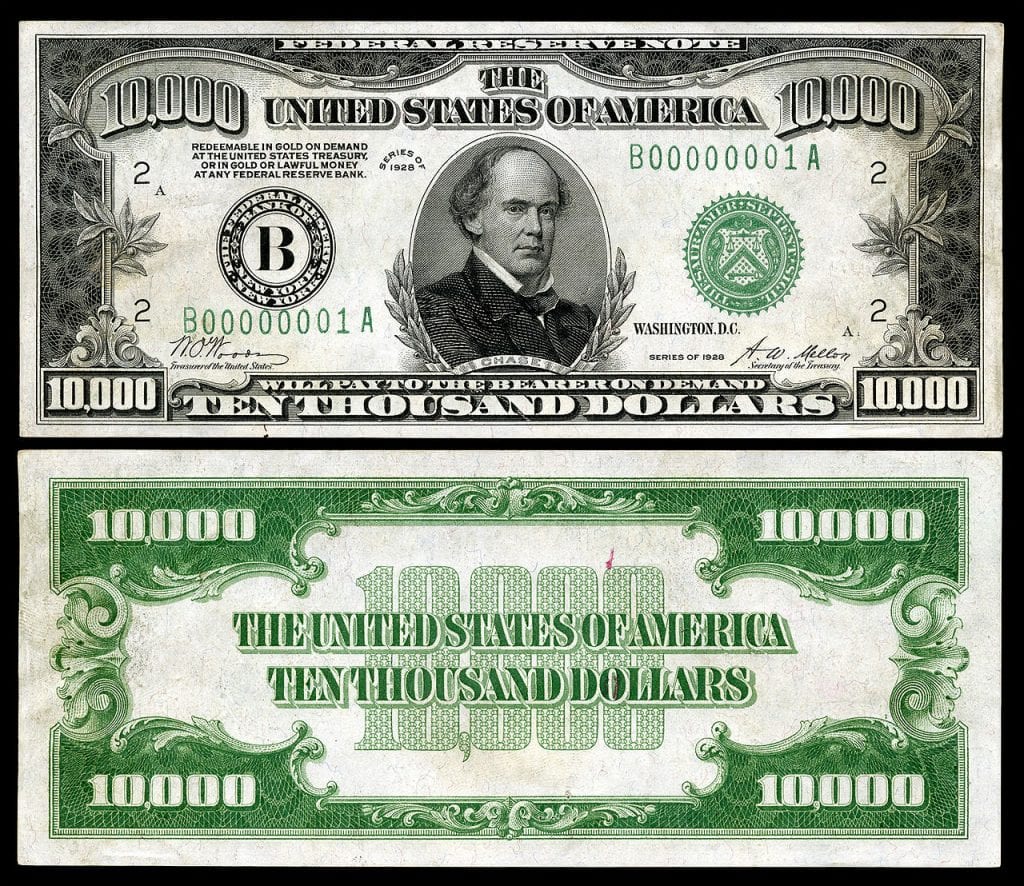 According to the research, it is estimated that only less than 350 of the $10,000 bills are in circulation today. Going into the depth, only 8 of the 1928 bills are known to exist.

Out of those eight, 2 are placed in the museums. Now with this, we can very well imagine it’s worth it because of such rarity.
This bill is a collector’s item.

The collectors will pay for these few remaining bills very gladly. In some cases, this can have worth more than $140,000, but if the bill is in poor condition then you can easily have almost $30,000 for it. So we can easily say that finding one of these bills is like finding a treasure.
Its worth depends on its present condition. Here we will also discuss the categories of its conditions.

So make sure you know the value of your paper currency before taking them to a bank. There are too many stories of people finding rare, old bills and turning them in for their face value.

Grading System:
Here we will describe different categories of these notes. They are divided into three grading systems.

Very Fine:
This is the note which for a long time was in circulation and is relatively crisp. This note may have light smudges and folds.

Extremely Fine:
This is a note which has been circulated lesser. This note will show the original crispness and will be as bright as day. There are absolutely no stains or tears or discoloration in it but may have minor folds.

MS 63 Uncirculated:
This is the note which is not circulated even once.

This not have the original crispness. It doesn’t have any of the folds, stains, tears, or discoloration in it.

Why Did We Get Rid of High Denomination Bills and Currency?

If you had a $10,000 bill right now, it’s still completely legal tender. The United States government printed it, and they have to honor it.

However, it has been labeled as discontinued since 1969. The whole point of these bills was to make large-scale bank transactions easier and take less time, saving money on labor and overall bank time.

However, they were barely used, and banks didn’t see a reduction in transaction times. Since it’s far easier for someone to counterfeit US bills in our current day and age, don’t expect to see high denomination bills to enter circulation or new production anytime soon.

$10,000 bills are actually real and are still honored by the United States government as legal tender. If you have a $10,000 bill in mint condition, it’s worth roughly 14x more than its actual value, so you might want to hang on to it! Who knows, it may come in handy the next time a global pandemic strikes again.

While vastly unknown to the public-at-large, Salmon P. Chase is the face of the $10,000 bill. It was intended to make banking easier, but in turn didn’t provide many benefits. Not enough people were lucky enough to ever carry one of these bills in their pocket so they fell by the wayside.